How Much Does Hendrix College Cost?

See current and projected tuition and fees for Hendrix College, and how those expenses constrast to nationwide and regional averages. You can jump to any of the following sections in our Hendrix cost report:

How Much Does Hendrix Charge for Tuition?

The average tuition and fees at Hendrix College for undergraduates was $49,490 a year in 2019-2020. Students from Arkansas did not receive a discount.

Hendrix tuition and fees is for one year of attendance, not including room and board.

The numbers quoted on this page are all sticker price and don't include any financial aid or scholarships students may qualify for.

How much does Hendrix College cost for part-time students?

Go to the Cost Per Credit Hour page for details.

How Do Hendrix Tuition & Fees Compare to Other Schools?

Take a look at the following chart to see how Hendrix College compares to other schools in terms of tuition and fees.

Remember to also consider financial aid when trying to decide if you can afford to go to a particular school. For more details on that, see: Hendrix College Financial Aid.

Tuition and Fees for Hendrix College increased with an average annual rate of 3.94% over the past five years. Tuition by 3.96%, and fees by 1.30%. This school year, students can expect to pay $53,469 if the growth keeps up.

This doesn't include other costs such as room and board, transportation or books.

The following chart shows projected upcoming tuition and fees for undergraduates at Hendrix. 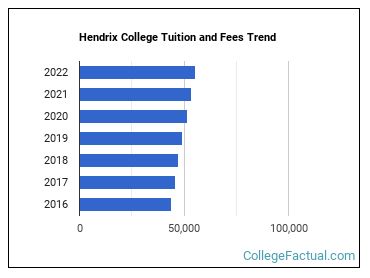 Take note of just how much the tuition and fees are increasing yearlyl. At a log of colleges students will end up paying more for their final year of school than they did for their first.

Discover answers to your finance concerns in the tuition & fees FAQ.