Are you fascinated with math and science? A major in Biomathematics and Bioinformatics will allow you to fully explore mathematics and biology. You will learn how to complete mathematical computations that are essential to biology and research. Along with learning difficult mathematics you will also study areas such as genomics, molecular modeling, structural biology, ecology, systems biology, genetics, microbiology, chemistry, and physics. The information you learn in your classes will give you the knowledge to develop new mathematical methods, track genetic diseases, and help improve human life.

This major is unique to biology because it allows you to research in a very interdisciplinary field. You will become immersed in biology and mathematics and will decide what area interests you the most as you choose your concentration. 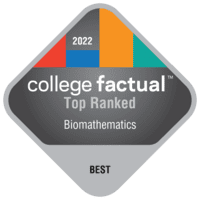 What Are The Requirements For a Degree in Biomathematics & Bioinformatics

Students who choose this major should enjoy mathematics. You will spend a great deal of time memorizing formulas and solving problems. Hard work along with analytical and critical thinking skills will help you succeed.

Assignments will involve group work as well as independent research. Work on your communication and interpersonal skills for success in completing group projects. Having a good relationship with your advisor is important as you tailor your courses around your interests, or pursue independent studies with their guidance. The ability to collaborate will be easily applied to any career path that you choose.

This major requires dedication and work, but is very rewarding as complex problems become solvable. Your classes and study will enable you to develop analytical and predictive models of biology. Motivation and an independent work ethic will help you gain skills and knowledge that are desirable in the workforce.

Prior Education for a Biomathematics Program

New students will need to have completed high school or a GED program and each school will have their own minimum GPA and SAT/ACT test requirements. Specific biomathematics careers may require a certain level of degree attainment or additional certifications beyond that. 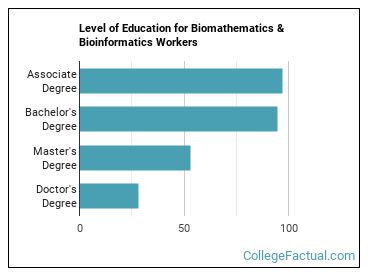 This of course varies depending on which biomathematics career you choose.

Majors in Biomathematics & Bioinformatics are well prepared to continue on to graduate school in areas such as mathematics, bioinformatics, computational biology, and mathematical biology. The background you will have built will allow you to be successful in any of these areas. There are also options for grads who want to go directly into the workforce. You will be able to work as a researcher in various scientific or medical industries. Some graduates also work in education as secondary or post-secondary teachers. You may also be able to apply for a grant to pursue independent research.

Want a job when you graduate with your biomathematics degree? Biomathematics & Bioinformatics careers are expected to grow 23.3% between 2016 and 2026.

The following options are some of the most in-demand careers related to biomathematics and bioinformatics.

Recently graduated biomathematics and bioinformatics students earned an average of $71,400 in 2017-2018. Earnings can range from as low as $63,100 to as high as $94,100. As you might expect, salaries for biomathematics graduates vary depending on the level of education that was acquired. 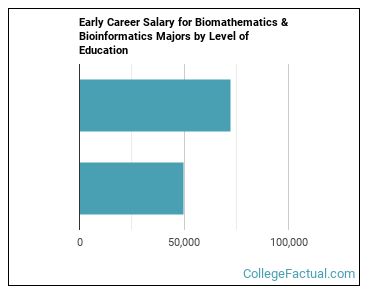 Salaries for biomathematics and bioinformatics graduates can vary widely by the occupation you choose as well. The following table shows the top highest paying careers biomathematics grads often go into.

Getting Your Biomathematics & Bioinformatics Degree

With over 455 different biomathematics degree programs to choose from, finding the best fit for you can be a challenge. Fortunately you have come to the right place. We have analyzed all of these schools to come up with hundreds of unbiased biomathematics school rankings to help you with this.

One of 14 majors within the Biological & Biomedical Sciences area of study, Biomathematics & Bioinformatics has other similar majors worth exploring.

Most Popular Majors Related to Biomathematics