3 Colleges in the United States
16 Associate Degrees
Germanic Languagesassociate programs are on the lower end of the spectrum in terms of popularity. In fact, the major degree program ranks #245 out of the 312 majors we look at each year. While this may limit the number of schools that offer the degree program, there are still top-quality ones to be found.

Jump to one of the following sections:

Choosing a Great Germanic Languages School for Your Associate Degree 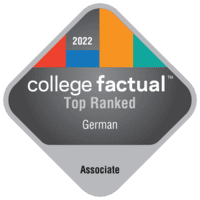 Your choice of Germanic languages for getting your associate degree school matters. Important measures of a quality German program can vary widely even among the top schools. Below we explain some of the most important factors to consider before making your choice:

The overall quality of a associate degree school is important to ensure a quality education, not just how well they do in a particular major. To make it into this list a school must rank well in our overall Best Colleges ranking. This ranking considered factors such as graduation rates, overall graduate earnings and other educational resources to identify great colleges and universities.

The vast majority of the schools on this list are in at least the top 42% of our overall quality ranking.

To determine the overall quality of a graduate school, one factor we look at is the average early-career salary of those receiving their associate degree from the school. After all, your associate degree won't mean much if it doesn't help you find a job that will help you earn a living.

Our complete ranking methodology documents in more detail how we consider these factors to identify the best schools for Germanic languages students working on their associate degree.

Since picking the right college can be one of the most important decisions of your life, we've developed the Best Germanic Languages Associate Degree Schools ranking, along with many other major-related rankings, to help you make that decision.

Explore the top ranked colleges and universities for Germanic languages students seeking a an associate degree.

Top Schools for an Associate in German

Weber State University is a great option for individuals pursuing an associate degree in Germanic languages. WSU is a very large public university located in the city of Ogden. This university ranks 3rd out of 14 colleges for overall associate degree quality in the state of Utah.

There were approximately 3 Germanic languages students who graduated with this degree at WSU in the most recent data year.

Any student pursuing a degree in an associate degree in Germanic languages needs to look into Lansing Community College. LCC is a large public college located in the medium-sized city of Lansing. This college ranks 10th out of 43 colleges for overall associate degree quality in the state of Michigan.

There were approximately 1 Germanic languages individuals who graduated with this degree at LCC in the most recent year we have data available.

There were roughly 2 Germanic languages individuals who graduated with this degree at Austin Community College District in the most recent year we have data available.

View the Best Germanic Languages Associate Degree Schools for a specific region near you.

Most Popular Online
in Germanic Languages

Best for Veterans
in Germanic Languages

Most Popular
in Germanic Languages

Most Focused
in Germanic Languages

Most Popular Majors Related to German