The languages of Iran and Persia are some of the oldest languages still significant in today's world. Dating back to the ancient, medieval and now modern Iran, these languages are still spoken by 110 million people today. This program focuses on the history of Iran and its bordering regions, including Persian, Avestan/Old Persian, and other related extinct and modern languages. Students will be instructed in modern Persian and other languages in various settings including business and science/technology.

While studying this major, you will take courses in Beginner, Intermediate, and Advanced Language Classes, Persian Culture, Persian Mythology and Folklore, Persian Literature in Translation, and Persian Poetry.

In 2019-2020, Iranian and Persian languages was the 363rd most popular major nationwide with 4 degrees awarded. This is a difference of 2 over the prior year, a growth of 50.0%. 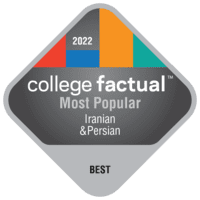 Patience is an essential quality when becoming fluent in another language. Many find Iranian & Persian languages difficult to learn at first, but success will come to those with persistence. A love for history and culture is ideal for this major, as students will take many classes on the rich background of Iran and its surrounding countries.

If you are interested in pursuing this as a major, there are some things you can do while still in High School to prepare. You should try to get exposure to your chosen language by taking a class or through tutoring. Other recommended classes include World History, World Religion, and Geography. Take advantage of any study abroad programs at your chosen University. This will give you valuable experience speaking the language as well as first-hand knowledge of the culture.

Getting Accepted Into an Iranian & Persian Languages Program

A high school diploma or equivalent is typically required for most Iranian and Persian degree programs and many students will need a minimum GPA and SAT/ACT score depending on the school. Specific Iranian and Persian careers may require a certain level of degree attainment or additional certifications beyond that. 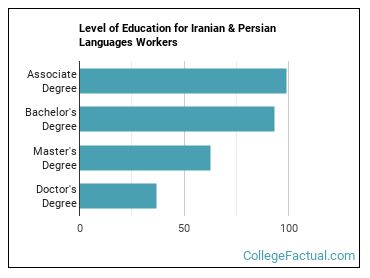 The education level required is different depending on the Iranian and Persian career you are seeking.

Career Opportunities for A Degree In Iranian & Persian Graduate

Graduates with a major in Iranian and Persian Languages are prepared for a variety of careers. Students who are interested in international relations may become a government consultant. These consultants gather, assess and scrutinize information to advise the National Security Council on workplace safety, or Internet security and other worldwide concerns. Students are also well prepared to become Foreign language or Literature Teachers, Interpreters or Translators. Archaeology is another field that attracts graduates of this major.

Want a job when you graduate with your Iranian and Persian degree? Iranian & Persian Languages careers are expected to grow 15.7% between 2016 and 2026.

The following options are some of the most in-demand careers related to Iranian and Persian languages.

How Much Money Do People With a Iranian & Persian Degree Make?

As you might expect, salaries for Iranian and Persian graduates vary depending on the level of education that was acquired.

Getting Your Iranian & Persian Languages Degree

With over 6 different Iranian and Persian degree programs to choose from, finding the best fit for you can be a challenge. Fortunately you have come to the right place. We have analyzed all of these schools to come up with hundreds of unbiased Iranian and Persian school rankings to help you with this.

Iranian & Persian Languages is one of 17 different types of Foreign Languages & Linguistics programs to choose from.