How Much Does Fort Hays State University Cost?

Is what Fort Hays State University charges for in-state and out-of-state tuition and fee reasonable when compared to nation, state and regional averages? Find out here. You can jump to any of the following sections in our FHSU cost report:

How Much Does FHSU Charge for Tuition?

In 2020-2021, the average out-of-state tuition and fees at Fort Hays State University ran about $15,870 per year for students working on an undergraduate degree. Those who hail from the state of Kansas get a discount and only needed to pay $5,430 per year.

These tuition and fees costs include one year of academic instruction, but do not cover room and board.

Keep in mind a lot of students have financial aid and scholarships that decrease the cost of college.

How much does Fort Hays State University cost for part-time students?

Go to the Cost Per Credit Hour page for details.

How Do FHSU Tuition & Fees Compare to Other Schools?

If you want to know how FHSU compares to other schools in the nation, in the region, and in the state, see the chart below.

Note that a school may appear to be more expensive than another school when you look at tuition and fees alone, but it may actually be a better deal when you factor in financial aid packages. For more details on that, see: Fort Hays State University Financial Aid.

In-state FHSU tuition and fees grew with an average annual rate of 1.92% over the past five years. Kansas residents may pay an estimated $5,641 this school year.

If the in-state FHSU tuition and fees growth rate stays consistent, two years of study could cost $11,390, and four years would cost $23,222.

The following chart shows projected upcoming tuition and fees for undergraduates at FHSU. 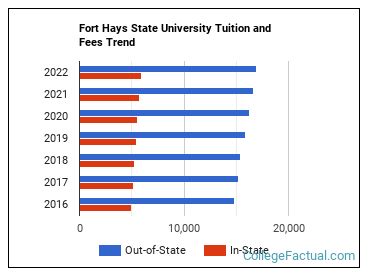 Factor Cost Increases Into Your Budget

Be aware of just how much the tuition and fees are increasing each year. At most colleges undergrads will wind up spending more on their last year of school compared to what they did for their first.

Find our answers to frequently asked questions and get additional information about college tuition and fees.

Options to Finance Your FHSU Education?