The main focus area for this major is General Studies. For more details on this concentration, visit its profile page.

Liberal Arts General Studies is a major offered under the liberal arts / sciences and humanities program of study at University of Mary Hardin - Baylor. Here, you’ll find out more about the major bachelor’s degree program in liberal arts, including such details as the number of graduates, diversity of students, and more.

Rankings for the UMHB BA in Liberal Arts

Each year, we produce a number of different types of college rankings to help students decide which school is the best fit for them. The bachelor's program at UMHB was ranked #823 on College Factual's Best Schools for liberal arts list. It is also ranked #60 in Texas.

Here are some of the other rankings for UMHB.

How Much Does a Bachelor’s in Liberal Arts from UMHB Cost?

One way to think about how much a school will cost is to look at how much in student loans that you have to take out to get your degree. Students who received their bachelor’s degree at UMHB in Liberal Arts walked away with an average of $29,375 in student debt. That is 24% higher than the national average of $23,628. 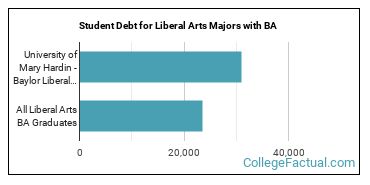 How Much Can You Make With a BA in Liberal Arts From UMHB?

liberal arts who receive their bachelor’s degree from UMHB make an average of $26,000 a year during the early days of their career. That is 15% lower than the national average of $30,751. 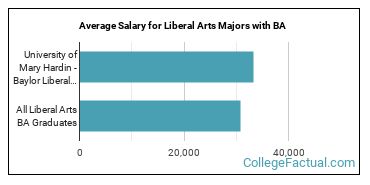 Does UMHB Offer an Online BA in Liberal Arts?

Online degrees for the UMHB liberal arts bachelor’s degree program are not available at this time. To see if the school offers distance learning options in other areas, visit the UMHB Online Learning page.

36 Bachelor's Degrees Awarded
69.4% Women
36.1% Racial-Ethnic Minorities*
There were 36 bachelor’s degrees in liberal arts awarded during the 2019-2020 academic year. Information about those students is shown below. 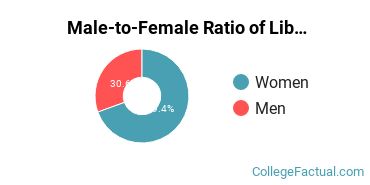 Around 36.1% of liberal arts bachelor’s degree recipients at UMHB in 2019-2020 were awarded to racial-ethnic minorities*. This is about the same as the nationwide number of 38%. 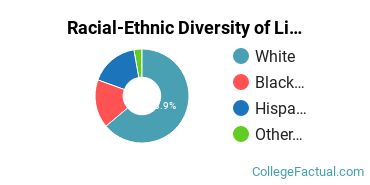 Liberal Arts General Studies students may decide to major in one of the following focus areas.