Latin Language & Literature was the 1,026 most popular major in the 2019-2020 school year. Colleges in the United States reported awarding 72 degrees in this year alone. This is a difference of 7 over the prior year, a growth of 9.7%.

The United States has 89 different schools where you can get a degree in Latin language and literature. This year's Best Latin Language & Literature Schools ranking compares 28 of them to identify the best overall programs in the country. Continue reading to check out one of our many unbiased rankings of Latin programs later in this article. 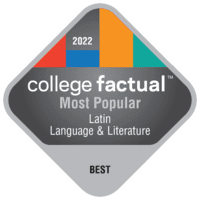 Requirements for Getting a Degree in Latin Language & Literature

Talking to others to convey information effectively is a required skill for Latin majors. Required skills include giving full attention to what other people are saying, taking time to understand the points being made, asking questions as appropriate, and not interrupting at inappropriate times and understanding written sentences and paragraphs in work related documents.

Prior Education for a Latin Program

Latin language and literature degree applicants generally need have finished high school or their GED. Many schools may also have GPA and SAT/ACT score minimums that must be met. Specific Latin careers may require a certain level of degree attainment or additional certifications beyond that.

There are many different Latin degree levels. You can spend many years getting as high as a in Latin language and literature to something that takes less time like a . How long it takes to complete some common Latin degree levels is shown below.

A bachelor's degree is the most common level of education achieved by those in careers related to Latin, with approximately 37.8% of workers getting one. Find out other typical degree levels for Latin workers below. 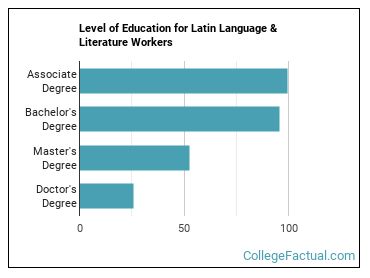 The education level required is different depending on the Latin career you are seeking.

Career Opportunities for A Degree In Latin Graduate

Want a job when you graduate with your Latin degree? Latin Language & Literature careers are expected to grow 8.3% between 2016 and 2026.

The following options are some of the most in-demand careers related to Latin language and literature.

How Much Money Do Latin Grads Make?

As you might expect, salaries for Latin graduates vary depending on the level of education that was acquired.

Salaries for Latin language and literature graduates can vary widely by the occupation you choose as well. The following table shows the top highest paying careers Latin grads often go into.

Getting Your Latin Language & Literature Degree

With over 114 different Latin degree programs to choose from, finding the best fit for you can be a challenge. Fortunately you have come to the right place. We have analyzed all of these schools to come up with hundreds of unbiased Latin school rankings to help you with this.

One of 3 majors within the Classical Languages & Literature area of study, Latin Language & Literature has other similar majors worth exploring.

Most Popular Majors Related to Latin