8 Colleges in the New England Region
125 Master's Degrees
$37,100 Avg Early-Career Salary
a master's degree in romance languages is more popular than many other degrees. In fact, it ranks #106 out of 326 on popularity of all such degrees in the nation. So, you have a fair amount of options to choose from when looking for a school.

Choosing a Great Romance Languages School for Your Master's Degree 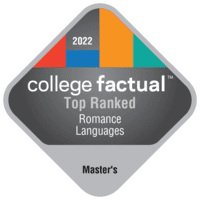 The romance languages master's degree program you select can have a big impact on your future. This section explores some of the factors we include in our ranking and how much they vary depending on the school you select. Below we explain some of the most important factors to consider before making your choice:

Average early-career salary of those graduating with their master's degree is one indicator we use in our analysis to find the schools that offer the highest-quality education. After all, your master's degree won't mean much if it doesn't help you find a job that will help you earn a living.

Our complete ranking methodology documents in more detail how we consider these factors to identify the best schools for romance languages students working on their master's degree.

Since the program you select can have a significant impact on your future, we've developed a number of rankings, including this Best Romance Languages Master's Degree Schools in the New England Region list, to help you choose the best school for you.

Below you'll see a list of the best colleges and universities for pursuing a master's degree in romance languages.

Middlebury College is one of the best schools in the country for getting a master's degree in romance languages. Located in the town of Middlebury, Middlebury is a private not-for-profit college with a small student population.

Students who graduate with their master's from the romance languages program state that they receive average early career income of $37,100.

Boston U is a fairly large private not-for-profit university located in the city of Boston.More information about a master’s in romance languages from Boston University

Located in the suburb of Amherst, UMass Amherst is a public university with a very large student population.More information about a master’s in romance languages from University of Massachusetts Amherst

Located in the suburb of Kingston, URI is a public university with a large student population.More information about a master’s in romance languages from University of Rhode Island

SCSU is a medium-sized public university located in the medium-sized city of New Haven.More information about a master’s in romance languages from Southern Connecticut State University

Explore the best romance languages schools for a specific state in the New England Region .

Most Popular Online
in Romance Languages

Best for Veterans
in Romance Languages

Most Popular
in Romance Languages

Most Focused
in Romance Languages