There is roughly 311 different languages spoken in the United States alone, with more than 6,500 languages spoken in the world. Globalization and increasing communication with foreign countries has increased the need for bilingual speakers. By entering into the field of Foreign Languages and Linguistics, you will not only master a second language, you will become a more diverse and thoughtful person.

There are many different majors you can explore within this field. Some popular choices include African Languages, Germanic Languages, Romance Languages, Iranian and Persian, and American Sign Language.

While focusing on one of these majors, you will be instructed in the dialect, philology, literature, culture and history of the language. Some of the courses you will take include Beginning, Intermediate, and Advanced Languages, European History, Literature, and Religion. What Are The Requirements For a Degree in Foreign Languages & Linguistics

While learning a new language it is necessary to have patience and perseverance. Some of these dialects are complicated and require practice and focus. It helps to have an ear for language and great attention to detail. To prepare for this field, students are advised to take prior courses in Foreign Language, History, Politics, and Religion. Take any advantage to study abroad while in college. This will give you invaluable, first-hand experience with the language and culture of a foreign country. 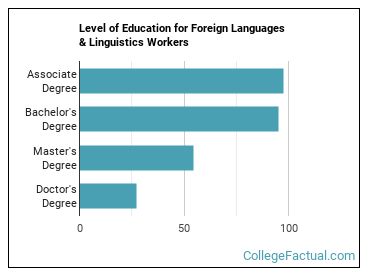 This of course varies depending on which foreign languages and linguistics career you choose.

A graduate with a degree in this field can enter into many different occupations. You would be well prepared to teach Foreign Language, English, History, or Literature in High School or teach a Foreign Language to adults. You could also continue your education in order to become a University Professor. If education does not interest you, you can work for the government in international relations or become a Foreign Service Officer. Other students may choose to become Anthropologists or Archeologists, Librarians or Museum Curators. Finally, another career choice is to become a translator or interpreter. Well-trained translators and interpreters are in high demand because of growing communication between nations.

Want a job when you graduate with your foreign languages and linguistics degree? Foreign Languages & Linguistics careers are expected to grow 8.5% between 2016 and 2026.

The following options are some of the most in-demand careers related to foreign languages and linguistics. 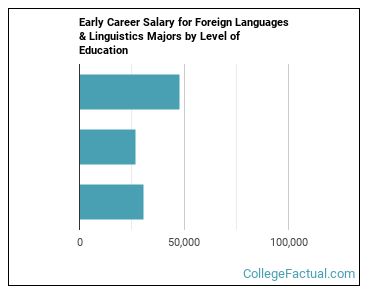 Getting Your Foreign Languages & Linguistics Degree