Asian culture has survived for over three thousand centuries, and its influence has expanded far past Asia. By majoring in East Asian Languages you will learn various Asian dialects, along with Asian grammar and literature. In addition, there will be classes on East Asian philosophy, religion, and applications to business and technology.

Concentrations within this major would include Chinese, Japanese, Korean or Tibetan Languages and Literature. Depending on which concentration you choice, you will be taking courses in Japanese, Korean, Japanese, and Tibetan (beginning, intermediate, and advanced), Chinese history, Korean Art, Buddhist studies, and Modern Chinese film.

There are 174 schools offering degrees in East Asian languages in the United States. Our 2022 Best East Asian Languages Schools ranking analyzes 101 of these schools to determine the best overall colleges for East Asian languages students. Continue reading to check out one of our many unbiased rankings of East Asian programs later in this article. 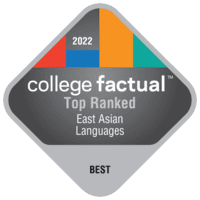 East Asian languages can be challenging for English speakers to learn because the characters and pronunciation are so different. Patience and persistence are important to find success in this field. The complex characters that make up the written language rely on precise handwork, making an eye for detail essential.

In order to prepare for this major, students are advised to take courses in World History, English, World Religion, and Government. These courses will help student understand the fundamentals of East Asian Languages. There are opportunities for study abroad programs at some institutions. This would allow student to practice their lingual skills and experience the culture first hand.

A high school diploma or equivalent is typically required for most East Asian degree programs and many students will need a minimum GPA and SAT/ACT score depending on the school. In addition to these basic East Asian languages program qualifications, to serve in some East Asian careers, special certification may be required outside of your degree.

A doctor's degree is the most common level of education achieved by those in careers related to East Asian, with approximately 36.7% of workers getting one. Find out other typical degree levels for East Asian workers below.

62.8% of East Asian workers have at least a master's. The chart below shows what degree level those who work in East Asian languages have obtained. 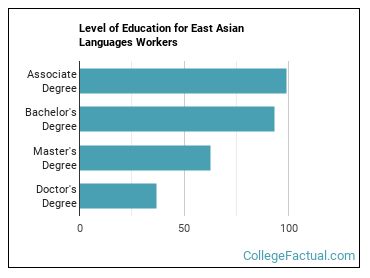 The education level required is different depending on the East Asian career you are seeking.

A degree in East Asian Languages can lead to many different career opportunities. If you are interested in teaching, there are positions in Postsecondary and Adult Education. You would have the opportunity to teach an East Asian Language or English, along with culture and history. Another option is to become a translator. Translators are in high demand because of growing business between nations. If you are interested in Foreign Service, you can become a Foreign Service Officer. These officers endorse American business and political interests and give information and aid about their countries to the U.S policymakers. They arrange cultural exchanges, and help Americans travel abroad.

Want a job when you graduate with your East Asian degree? East Asian Languages careers are expected to grow 15.7% between 2016 and 2026.

The following options are some of the most in-demand careers related to East Asian languages.

How Much Money Do East Asian Grads Make? 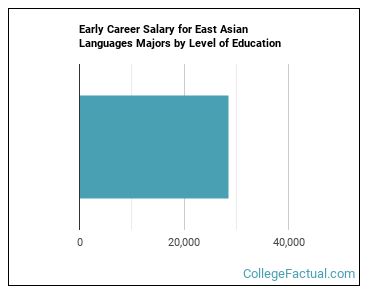 Getting Your East Asian Languages Degree

With over 524 different East Asian degree programs to choose from, finding the best fit for you can be a challenge. Fortunately you have come to the right place. We have analyzed all of these schools to come up with hundreds of unbiased East Asian school rankings to help you with this.