3 Colleges in the Middle Atlantic Region
59 Master's Degrees
You'll be studying one of the lesser sought-after majors if you pursue a Master's Degree in East Asian languages. It is ranked #224 out of 343 major degree programs in terms of popularity. While this may limit the number of schools that offer the degree program, there are still top-quality ones to be found. 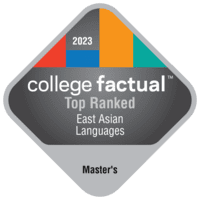 The East Asian master's degree program you select can have a big impact on your future. Important measures of a quality East Asian program can vary widely even among the top schools. Below we explain some of the most important factors to consider before making your choice:

Average early-career salary of those graduating with their master's degree is one indicator we use in our analysis to find the schools that offer the highest-quality education. After all, your master's degree won't mean much if it doesn't help you find a job that will help you earn a living.

Our complete ranking methodology documents in more detail how we consider these factors to identify the best schools for East Asian languages students working on their master's degree.

Since picking the right college can be one of the most important decisions of your life, we've developed the Best East Asian Languages Master's Degree Schools in the Middle Atlantic Region ranking, along with many other major-related rankings, to help you make that decision.

The following list ranks the best colleges and universities for pursuing a master's degree in East Asian languages.

Columbia University in the City of New York

Explore the best East Asian languages schools for a specific state in the Middle Atlantic Region .