3 Colleges in the Southwest Region
4 Master's Degrees
If you're seeking a Master's Degree in Germanic languages, you will have fewer peers than average since the major degree program is the #225 one in the country in terms of popularity.This may make is a little harder to find a school that is a good fit for you.

What's on this page:

Choosing a Great Germanic Languages School for Your Master's Degree 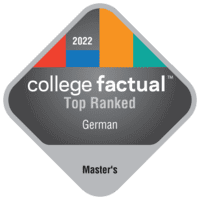 Your choice of Germanic languages for getting your master's degree school matters. This section explores some of the factors we include in our ranking and how much they vary depending on the school you select. To make it into this list, a school must excel in the following areas.

The overall quality of a master's degree school is important to ensure a good education, not just how well they do in a particular major. To take this into account we consider a school's overall Best Colleges for a Master's Degree ranking which itself looks at a collection of different factors like degree completion, educational resources, student body caliber and post-graduation earnings for the school as a whole.

Over 80% of the schools in this list are in the top 74% of our overall quality ranking.

Our complete ranking methodology documents in more detail how we consider these factors to identify the best colleges for Germanic languages students working on their master's degree.

Since the program you select can have a significant impact on your future, we've developed a number of rankings, including this Best Germanic Languages Master's Degree Schools in the Southwest Region list, to help you choose the best school for you.

Explore the top ranked colleges and universities for Germanic languages students seeking a a master's degree.

Top Southwest Region Schools for a Master's in German

There were about 1 Germanic languages students who graduated with this degree at University of Oklahoma in the most recent year we have data available.

There were about 2 Germanic languages individuals who graduated with this degree at University of Arizona in the most recent year we have data available.

There were roughly 1 Germanic languages students who graduated with this degree at UNM in the most recent data year.

Explore the best Germanic languages schools for a specific state in the Southwest Region .

Most Popular Online
in Germanic Languages

Best for Veterans
in Germanic Languages

Most Popular
in Germanic Languages

Most Focused
in Germanic Languages

Rankings in Majors Related to German