8 Colleges in the Far Western US Region
27 Doctor's Degrees
East Asian Languages is about average in terms of popularity for doctor's degrees programs. That is, it ranks #138 out of the 306 majors across the country that we analyze each year. So, it might take a little more work to find colleges and universities that offer the degree program.

In 2023, College Factual analyzed 8 schools in order to identify the top ones for its Best East Asian Languages Doctor's Degree Schools in the Far Western US Region ranking. Combined, these schools handed out 27 doctor's degrees in East Asian languages to qualified students. 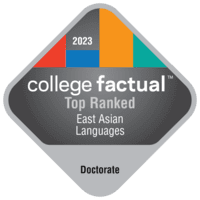 Your choice of East Asian languages for getting your doctor's degree school matters. Important measures of a quality East Asian program can vary widely even among the top schools. To make it into this list, a school must excel in the following areas.

The overall quality of a doctor's degree school is important to ensure a quality education, not just how well they do in a particular major. To make it into this list a school must rank well in our overall Best Colleges for a Doctor's Degree ranking. This ranking considered factors such as graduation rates, overall graduate earnings and other educational resources to identify great colleges and universities.

One measure we use to determine the quality of a school is to look at the average salary of doctorate graduates during the early years of their career. This is because one of the main reasons people pursue their doctor's degree is to enable themselves to find better-paying positions.

Our complete ranking methodology documents in more detail how we consider these factors to identify the best schools for East Asian languages students working on their doctor's degree.

When choosing the right school for you, it's important to arm yourself with all the facts you can. To that end, we've created a number of major-specific rankings, including this Best East Asian Languages Doctor's Degree Schools in the Far Western US Region list to help you make the college decision.

Located in the city of Seattle, UW Seattle is a public university with a very large student population.More information about a doctorate in East Asian languages from University of Washington - Seattle Campus

Located in the suburb of Santa Barbara, UCSB is a public university with a fairly large student population.More information about a doctorate in East Asian languages from University of California - Santa Barbara

UH Manoa is a fairly large public university located in the city of Honolulu.More information about a doctorate in East Asian languages from University of Hawaii at Manoa

UC Irvine is a fairly large public university located in the city of Irvine.More information about a doctorate in East Asian languages from University of California - Irvine

Explore the best East Asian languages schools for a specific state in the Far Western US Region .

East Asian Languages is one of 17 different types of Foreign Languages & Linguistics programs to choose from.