4 Colleges in the New England Region
26 Master's Degrees
Linguistics is above average in terms of popularity with it being the #222 most popular master's degree program in the country. As a result, there are many college that offer the degree, making your choice of school a hard one.

For its 2022 ranking, College Factual looked at 4 schools in the New England Region to determine which ones were the best for linguistics students pursuing a master's degree. When you put them all together, these colleges and universities awarded 26 master's degrees in linguistics during the 2019-2020 academic year.

Jump to one of the following sections:

Choosing a Great Linguistics School for Your Master's Degree 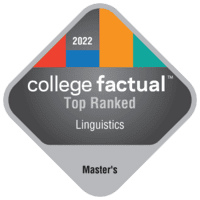 The linguistics master's degree program you select can have a big impact on your future. Important measures of a quality linguistics program can vary widely even among the top schools. To make it into this list, a school must excel in the following areas.

Over 80% of the schools in this list are in the top 38% of our overall quality ranking.

Our full ranking methodology documents in more detail how we consider these factors to identify the best schools for linguistics students working on their master's degree.

Since picking the right college can be one of the most important decisions of your life, we've developed the Best Linguistics Master's Degree Schools in the New England Region ranking, along with many other major-related rankings, to help you make that decision.

Below you'll see a list of the best colleges and universities for pursuing a master's degree in linguistics.

Top New England Region Schools for a Master's in Linguistics

Boston University is one of the finest schools in the country for getting a master's degree in linguistics. Boston U is a fairly large private not-for-profit university located in the large city of Boston. A Best Master's Degree Schools rank of #49 out of 1,305 colleges nationwide means Boston U is a great university overall.

There were approximately 6 linguistics individuals who graduated with this degree at Boston U in the most recent data year.

More information about a master’s in linguistics from Boston University

There were about 4 linguistics individuals who graduated with this degree at UCONN in the most recent year we have data available.

It is hard to beat University of Massachusetts Amherst if you want to pursue a master's degree in linguistics. Located in the large suburb of Amherst, UMass Amherst is a public university with a very large student population. A Best Master's Degree Schools rank of #113 out of 1,305 schools nationwide means UMass Amherst is a great university overall.

University of Massachusetts Amherst is one of the most popular universities to study linguistics in the New England Region with about 1 graduates in the most recent data year.

There were roughly 8 linguistics students who graduated with this degree at UMass Boston in the most recent year we have data available.

Explore the best linguistics colleges for a specific state in the New England Region .

Rankings in Majors Related to Linguistics

One of 5 majors within the Linguistics & Comparative Literature area of study, Linguistics has other similar majors worth exploring.

Most Popular Majors Related to Linguistics