5 Colleges in the United States
19 Master's Degrees
Japanese Language & Literaturemaster's programs are on the lower end of the spectrum in terms of popularity. In fact, the major degree program ranks #831 out of the 1172 majors we look at each year. As such, your educational options may be more limited than if you were in a more popular field. 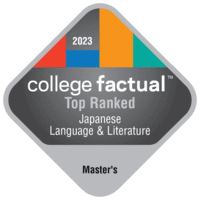 Your choice of Japanese language and literature for getting your master's degree school matters. Important measures of a quality Japanese language program can vary widely even among the top schools. When choosing a school we recommend considering some of the following factors:

Our complete ranking methodology documents in more detail how we consider these factors to identify the best colleges for Japanese language and literature students working on their master's degree.

When choosing the right school for you, it's important to arm yourself with all the facts you can. To that end, we've created a number of major-specific rankings, including this Best Japanese Language & Literature Master's Degree Schools list to help you make the college decision.

The following list ranks the best colleges and universities for pursuing a master's degree in Japanese language and literature.

Top Schools for a Master's in Japanese Language

University of Massachusetts Amherst is a wonderful choice for students pursuing a master's degree in Japanese language and literature. Located in the large suburb of Amherst, UMass Amherst is a public university with a very large student population.More information about a master’s in Japanese language and literature from University of Massachusetts Amherst

View the Best Japanese Language & Literature Master's Degree Schools for a specific region near you.

Japanese Language & Literature is one of 4 different types of East Asian Languages programs to choose from.